The results of the first New Zealand survey of members of Alcoholics Anonymous since 2004 has been published to mark the Fellowship’s 2016 AA Awareness Week.

Almost 700 New Zealand AA members took part in the online survey helping to put together a picture of some of the key characteristics of AA in this country and its members. The survey shows that most respondents are aged 40 and over and have been sober for more than five years (with a third sober for over 20 years), attend up to three meetings a week, belong to a home group and have a sponsor.

Illustrating the importance of one-to-one work of members carrying the message of recovery to still suffering alcoholics, the survey indicates that just over 23% of respondents cited an AA member as being responsible for their coming to AA, while almost 19% were referred by a treatment centre and 13% were introduced by a family member.

Almost 60% of respondents received some type of treatment or counselling before coming to AA and almost as many did so after coming to AA with a quarter saying it has played an important part in their recovery from alcoholism.
Women respondents outnumber men (52.59% to 46.98%), and although a wide range of occupations are represented in the survey, the largest categories are Retired (16.28%), Management (7.78%), Education and Training (6.77%), Office and Administrative Support (6.63%) and Arts, Design, Entertainment, Sports, and Media (5.48%). 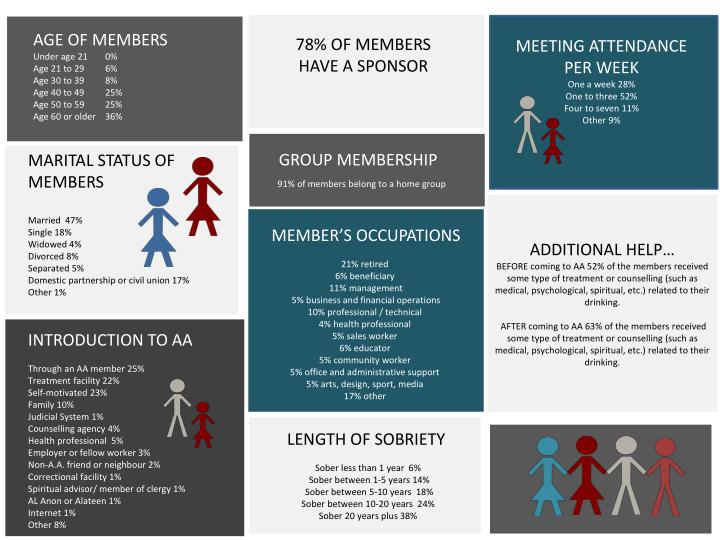 Anonymity is the spiritual foundation of our Fellowship and assures our members that their recovery will be private. Often, the active alcoholic will avoid any source of help, which might reveal his or her identity.

Some of our members and some media representatives may be unfamiliar with our tradition of personal anonymity at the media level.

The public relations policy of Alcoholics Anonymous is based on attraction rather than promotion. We need always maintain personal anonymity at the level of press radio and films.

Therefore we respectfully ask that no AA member be identified by full name or photograph in published, broadcast or online reports.

We also alert members of Alcoholics Anonymous who wish to share their experiences with the media, that they “share in a general way” that cannot identify them from unique events or circumstances in their life.

Throughout the world, favourable media coverage has been a principal means of bringing alcoholics into our Fellowship. You have helped make this possible, and for that we thank you.

Alcoholics Anonymous is not affiliated with any other organisation, although many have adapted AA’s Twelve Steps for their own use. AA is self-supporting, declining any outside contributions; and we are non-professional, offering only the voluntary support of one alcoholic helping another.